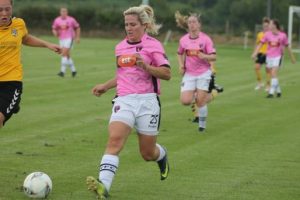 Hi Katrina, we first spoke in 2013 when your appearance as a Maor Uisce for Wexford during a Championship game sparked a unique response as to who was the mystery lady carrying water for them was….

Having won four Camogie All Ireland’s with Wexford, how did it feel to win the 2018 Continental Tyres FAI Cup in the Aviva Stadium which meant you completed a treble winning League, FAI Cup and Leinster Senior Cup medals, how did that feel after the win on Sunday ?

It was an amazing feeling.  It was so special as I had not played in the Aviva before and had been looking forward to it – then to come away with the win that’s what dreams are made of.

How did come to sign for Wexford Youths, what prompted the change in direction ?

I had decided to take a year or so off from Camogie as I had found I had lost my appetite, there were days I went out and thought what am I doing!    My mam had been diagnosed with breast cancer and I continued playing so maybe that was the catalyst that made me evaluate where I was going.   So, my plan was to take time out.  But when it was announced I wouldn’t be playing camogie I was approached by the Wexford Ladies Football manager and the Wexford Youths manager to sign for them.    The rest is history, I decided that maybe a change of code was just what I needed.

What was it like playing in the Champions League earlier this year, can you explain the format of how the group phase was played as it was played over a week in Belfast ?

The Champions League was such a learning curve from my perspective. You learn so much participating in such a prestigious tournament against professional teams.

The format was ten group winners and the two runners-up with the best record against the sides first and third in their section proceeded to the 17th August draw for the round of 32 to join the 20 teams given byes.  Wexford Youths were in Group 1 with Ajax (NED), Thor/KA (ISL) and Linfield (NIR hosts)

Having moved from GAA to Soccer, have you any future plans to move to any other sports ?

Not at the moment, I’m really enjoying my soccer. But I would love to give Rugby a go before my playing career is over. Just love the physical aspect of rugby.

Have you any burning ambitions you’d like to achieve while playing for Wexford Youths ?

Retaining everything we have achieved this year and going further in the Champions league would be a burning ambition.

How do you find the change between different sports, did you find it easy to make the switch between one to the other ?

I had always played soccer in the winter months to keep me fit for camogie -but not at the level of Wexford Youths.   I received an Ireland Cap for U19 when I was 16 but had chosen camogie at that stage.    The first year with Youths was difficult, the girls were streets ahead of me in fitness and skill level.  I worked hard to bring my game up and compete for a place on the team – I did a lot of gym work to get myself fitter and stronger.

If the chance to turn professional was offered like signing for a AWFL side in Australia like Cora Staunton has done and others, would you consider the move ?

I don’t think so but never say never.   I’m a bit of a home bird

How do you like to relax and get away from Sport ?

I don’t think I relax much.   I love gardening, so I find that relaxing even though it can be physical.    I like walking and have recently got more into hill/mountain walks.   We have an amazing country and its lovely to get out there and enjoy it.  Of course being in Wexford surrounded by beaches I love taking the dogs down for a run.

Who are the people you to for support when times get tough on the field of play or in life ?

My mam & dad, my brother Kieran & sister Sinead, my grandad has such a wise head and gives me great advice   My best friend Roisin is always there for me, so I have a wonderful support system.  My team mates we are such a tight knitted unit (family) and are always there for each other.

Who were your heroes growing up ?

Have you any plans for the future ?

I am hoping to apply for the garda in their next recruitment drive.

Thanks Katrina for taking time out to chat with me… All the best in the future….

I have worked in Community Radio for the last 5 years as part of a sports team - I am the main rugby correspondent. My ultimate aim is to become a leading sport journalist/broadcaster.I have spent the last few years honing my craft with a qualification in Radio Production and Presentation from Tralee Community College.
Tweets by GibneyCian